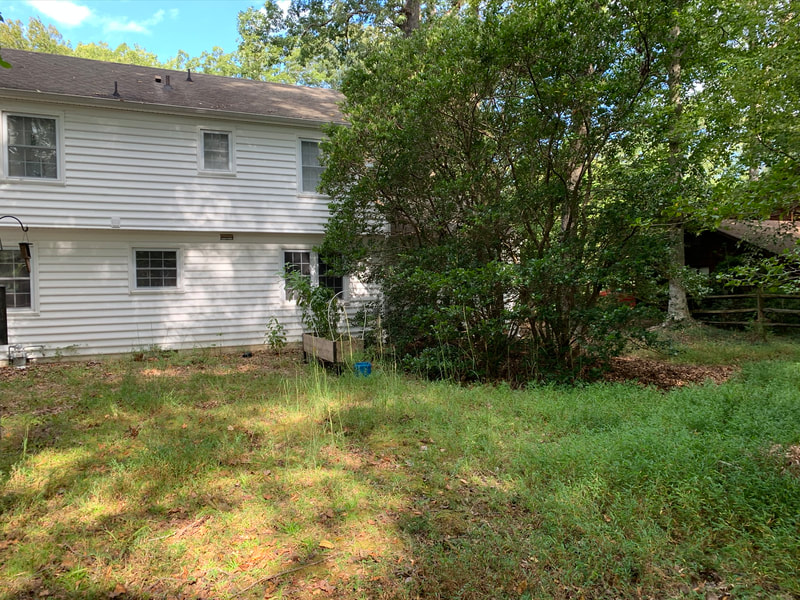 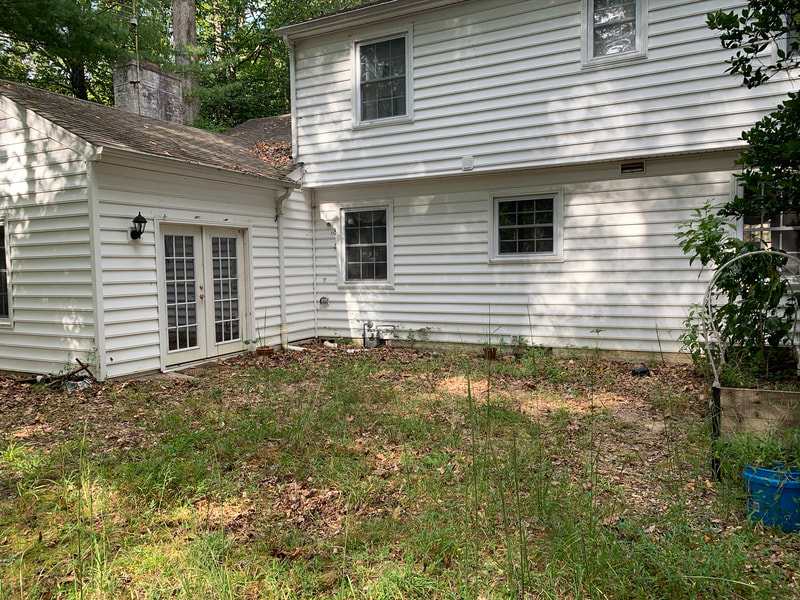 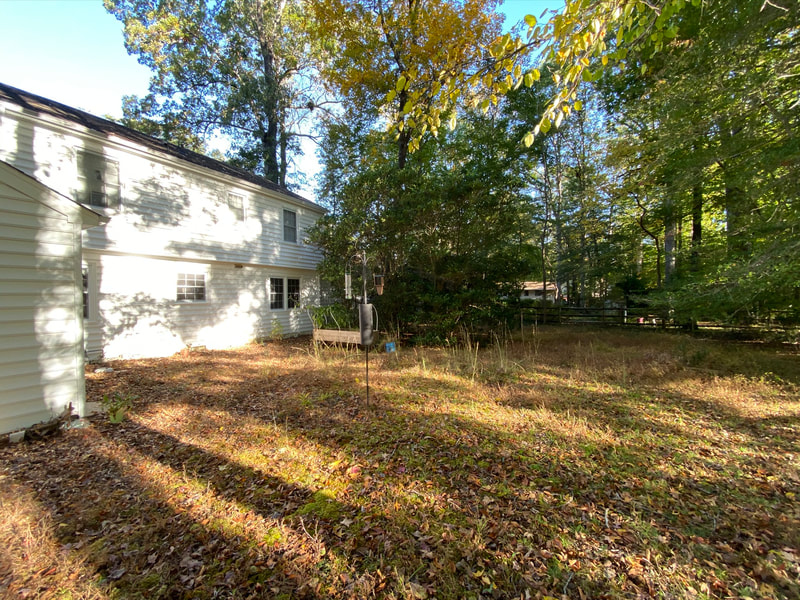 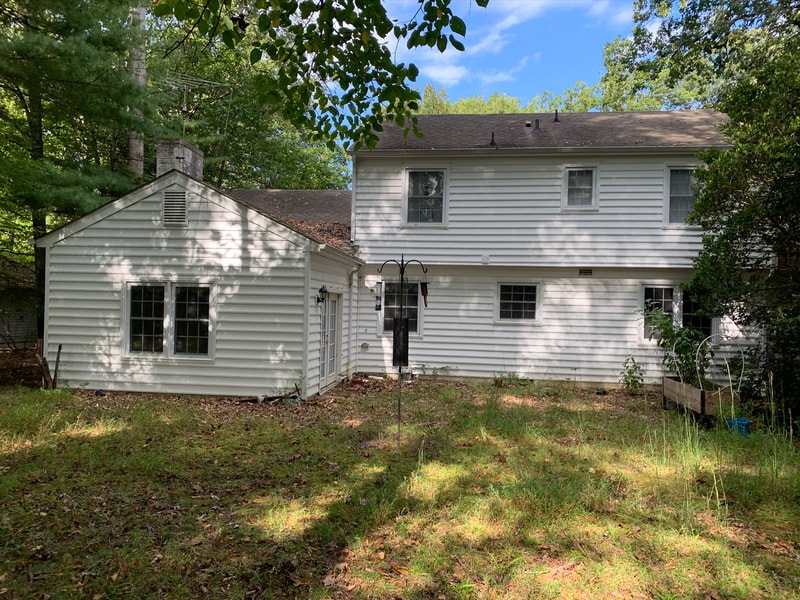 Option one was a simple, low-maintenance paver patio with basic landscaping around the perimeter, and a place for their elevated herb garden. Option two was a classic Colonial Williamsburg-inspired garden with brick-edged shell paths and a more detailed, intricate landscape.
While the simplicity of the paver patio was appealing and easy to maintain, our client really enjoys their walks through Colonial Williamsburg. So with the second option the winner, we headed off in this direction.
To make this work, we had to clean up the current landscape, remove the overgrowth, and get the existing ligustrum hedge back in check. We then laid out our design on the ground with marking paint and got right to work. As we were installing our bricks, we discovered an issue. There had been a concrete foundation in this space years ago! It was well hidden, but once we removed the overgrowth, it was now only 3-6" below grade and scattered throughout the space. We had three options - cut our bricks to fit (making them a shallower/weaker), remove the concrete, or raise the level of the whole space by 6". After consulting with our client, the third option was chosen. We brought in more soil, raising the whole area and allowing the bricks to sit flush with the grade 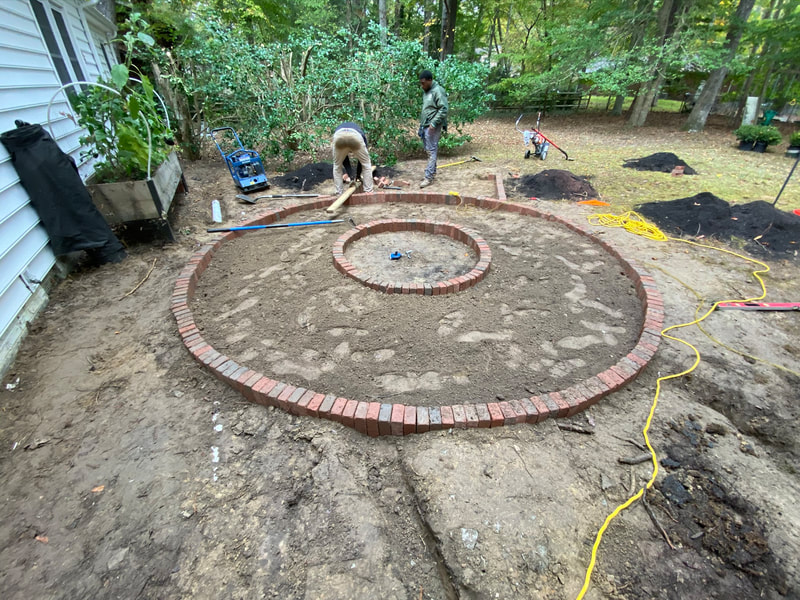 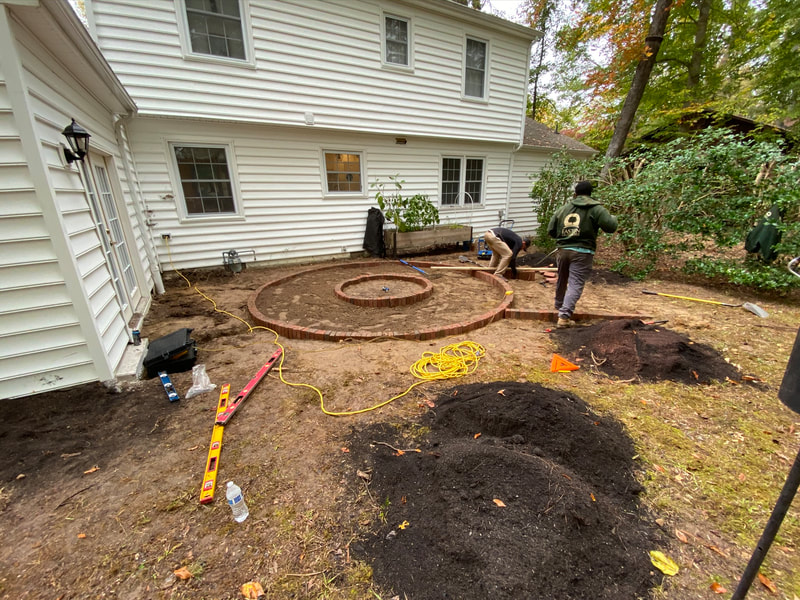 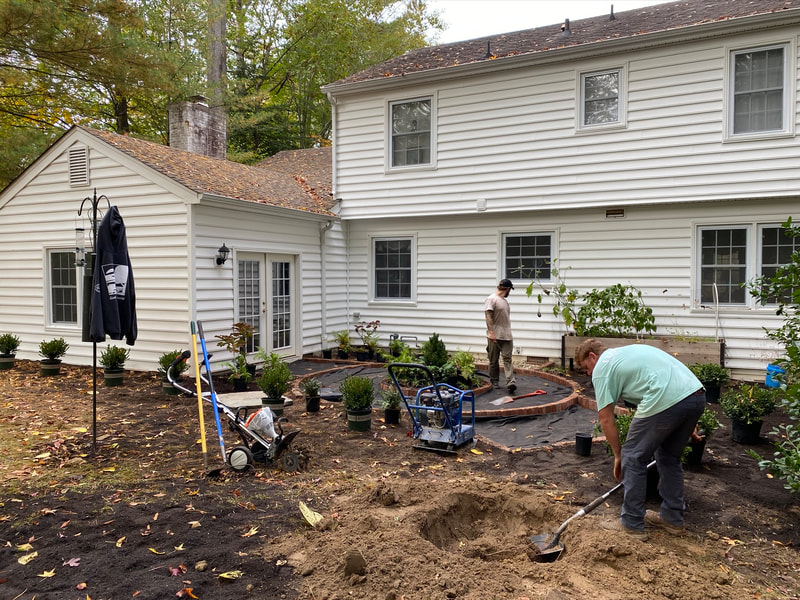 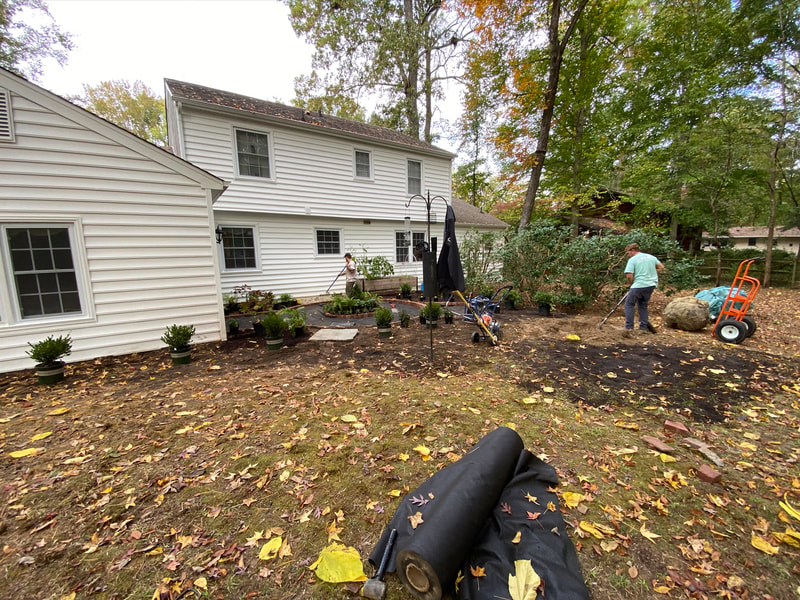 One other small issue we discovered while on site was that the old drainage system had been completely filled in by the roots of the existing ligustrum hedge. We were planning on making minor adjustments to this system already, but after consulting with our client, it was decided that the drainage system should be replaced with all new 4" PVC pipe. We trenched around the ligustrum, grabbing each downspout as we went, and ran them out into the middle of the yard where we added a drain popup. This allowed the water to disperse throughout the yard, and away from the home. 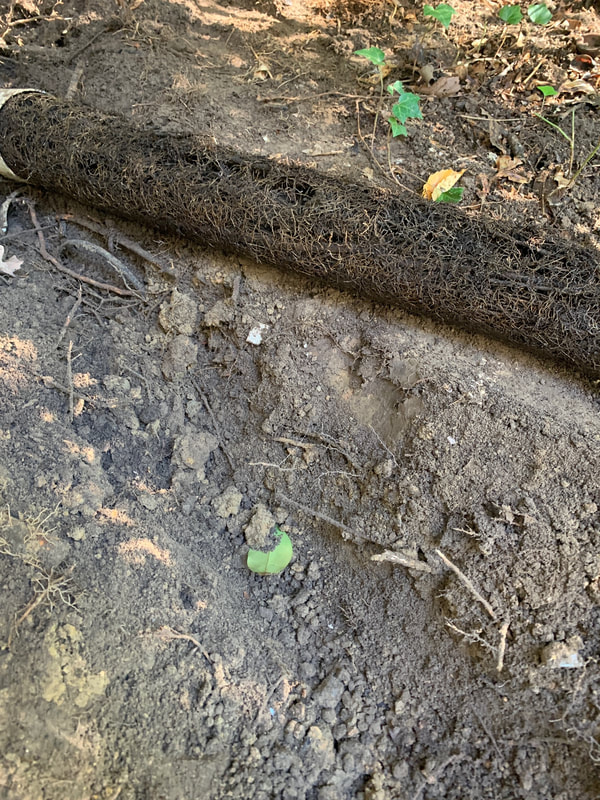 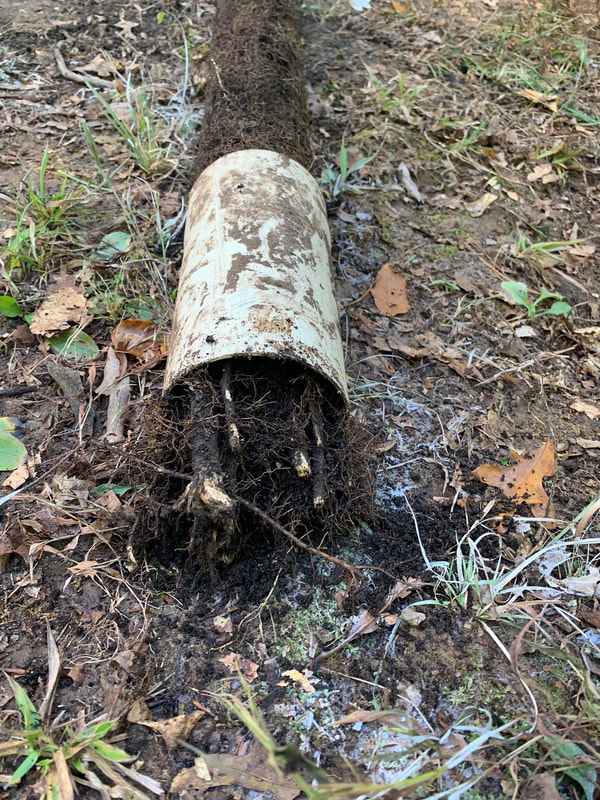 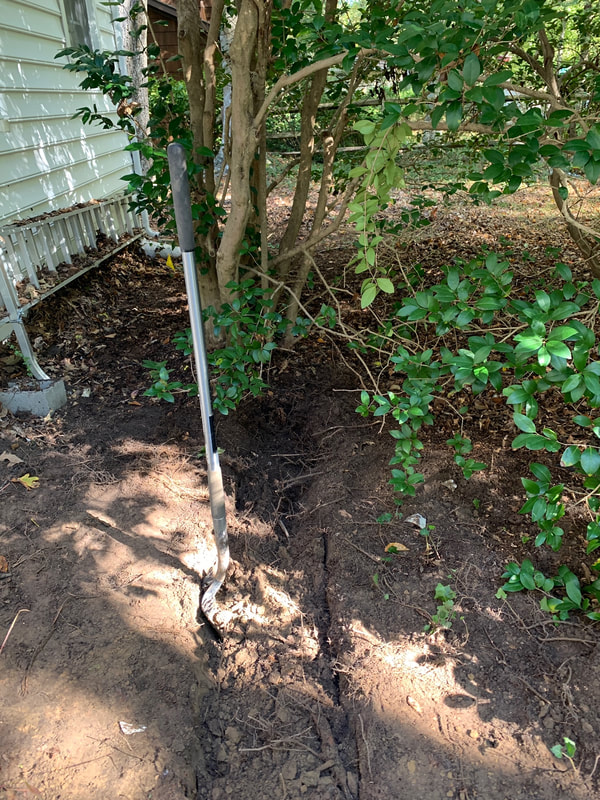 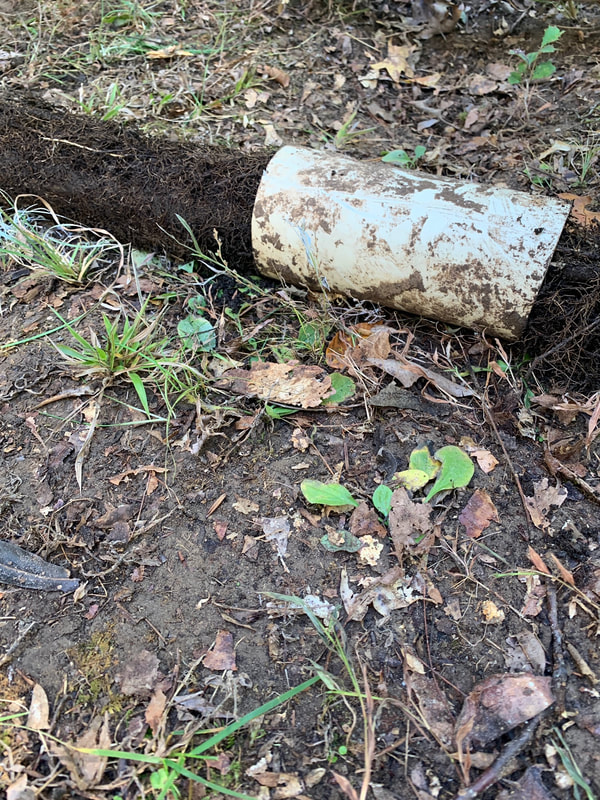 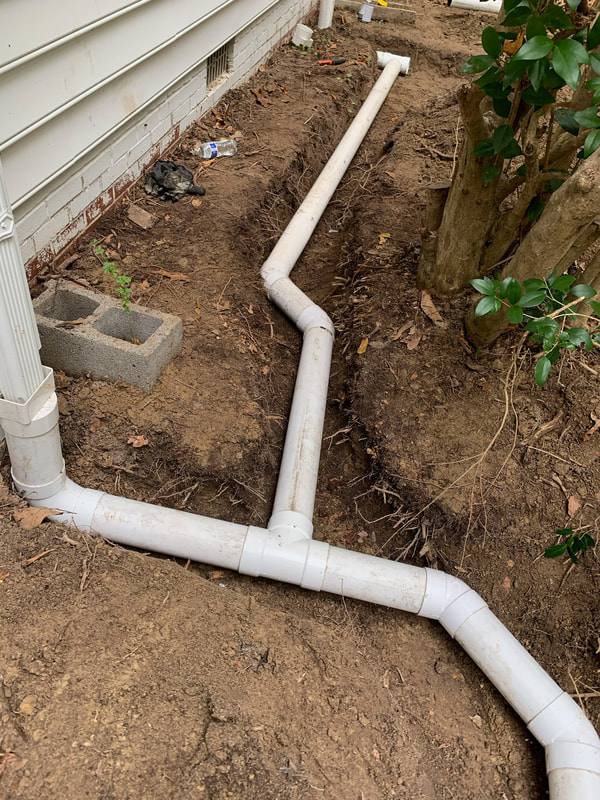 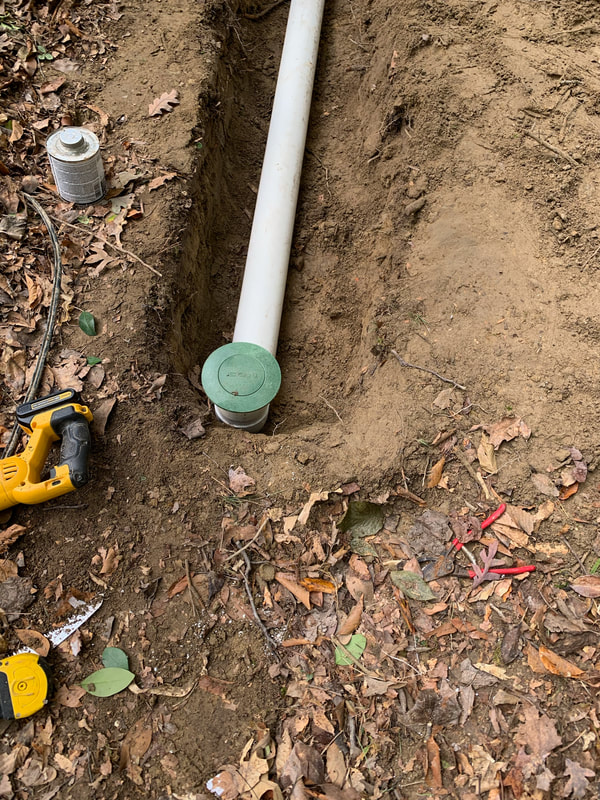 With both issues resolved, we were finally able to get back to laying our edging bricks. We backfilled between our bricks with a mixture of 50% clam shells from the Eastern Shore and 50% stone dust. We used a plate compactor every 2" all the way to the top - 8". We wanted a hard surface, so we ran the compactor over this mixture quite a few times - locking the base in place. ​ 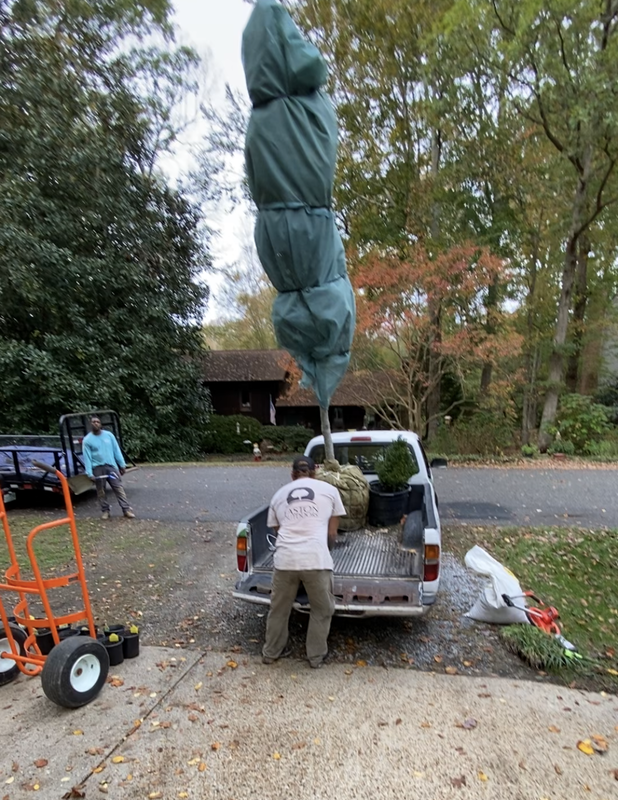 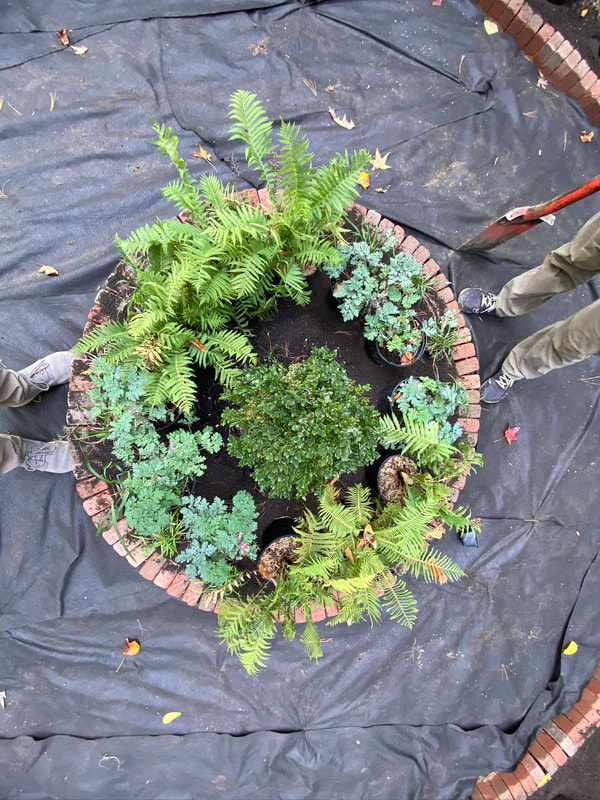 We now turned to the landscaping portion of the project. Because the deer are so prevalent in this area, and due to the heavy shade in the yard, our options were limited. We knew the area needed to be heavily planted with perennials, while maintaining a landscaped feel during the winter months when the perennials were dormant. We decided to use Winter Gem Boxwood along the side of the house, Carissa Holly around the right side of the space towards the house, and then a single cone shaped Green Mountain Boxwood in the center of the space surrounded by evergreen Spicata Liriope, Ostrich Ferns, and Bleeding Heart. 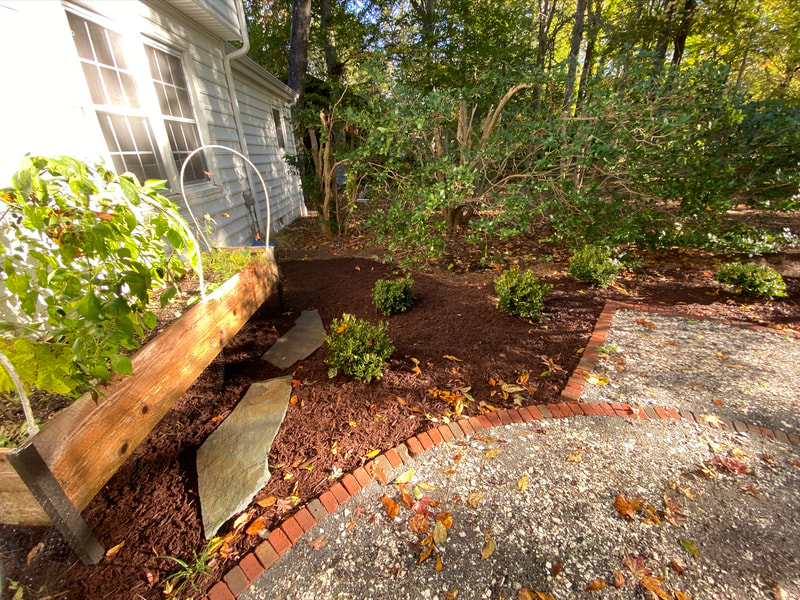 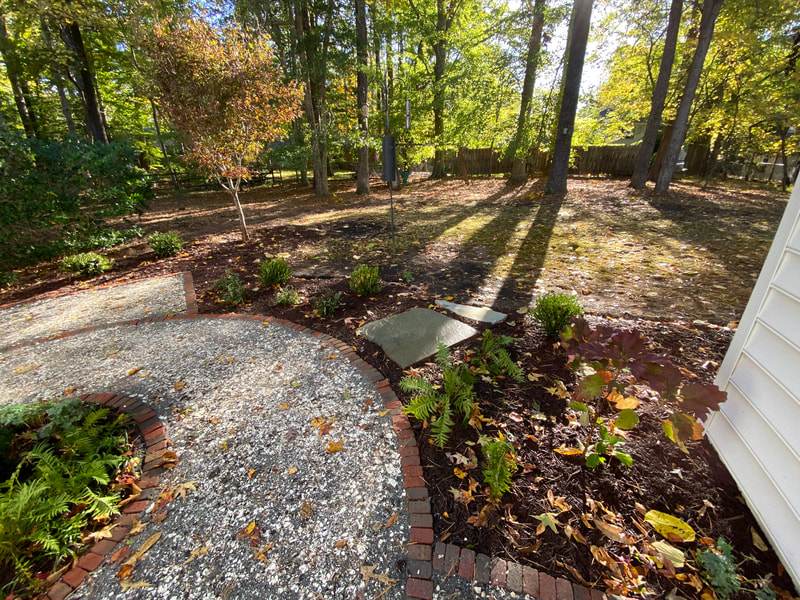 I also wanted to bring a sense of immediate maturity to the space, so we brought in a 14' tall Bloodgood Japanese Maple. It definitely did the trick! On either side of the back door, we placed two Snow Queen Oakleaf Hydrangeas underplanted with False Spirea and more Ostrich Ferns. Around the outer edge of the space in front of the Carissa's, we used Variegated Solomon's Seal and Painted Lady Ferns. We also moved the raised herb garden parallel to the home, and added a few slate stepping stones to allow easy access. For easy access from the patio space to the yard, we added a couple more slate steppers to complete the look.​ 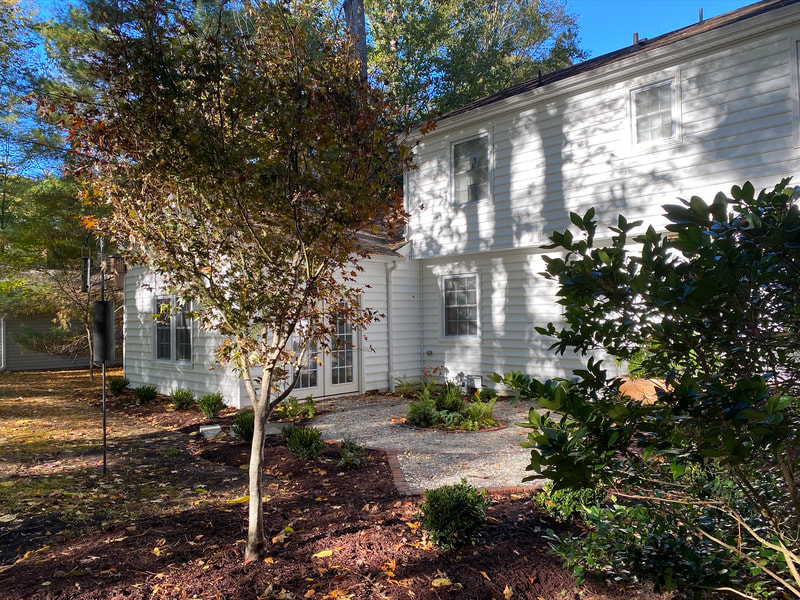 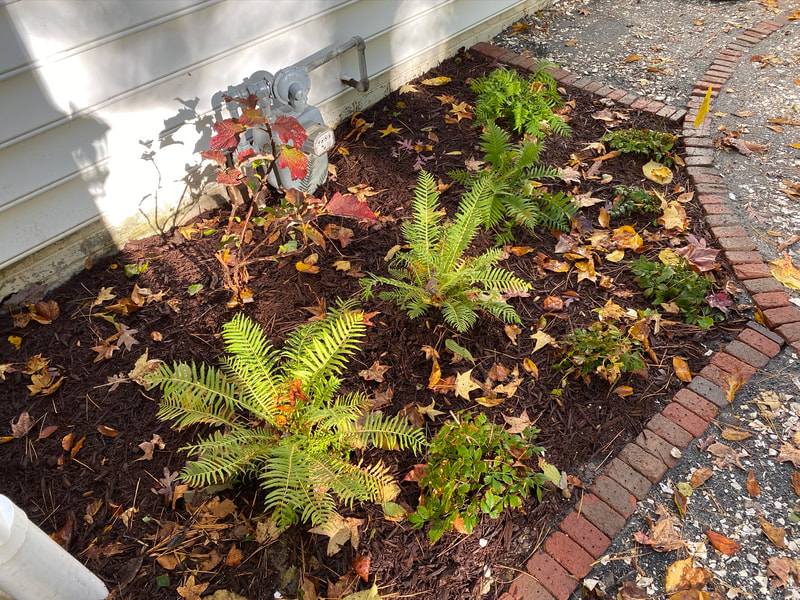 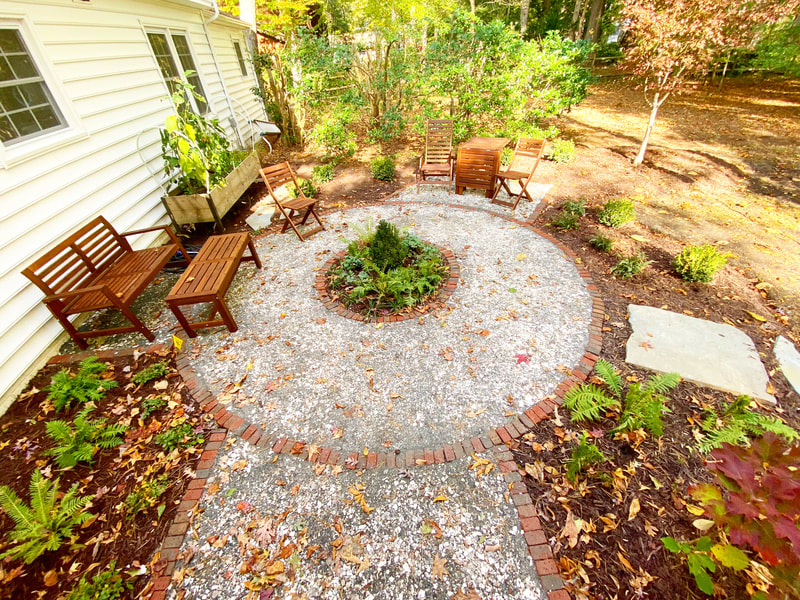 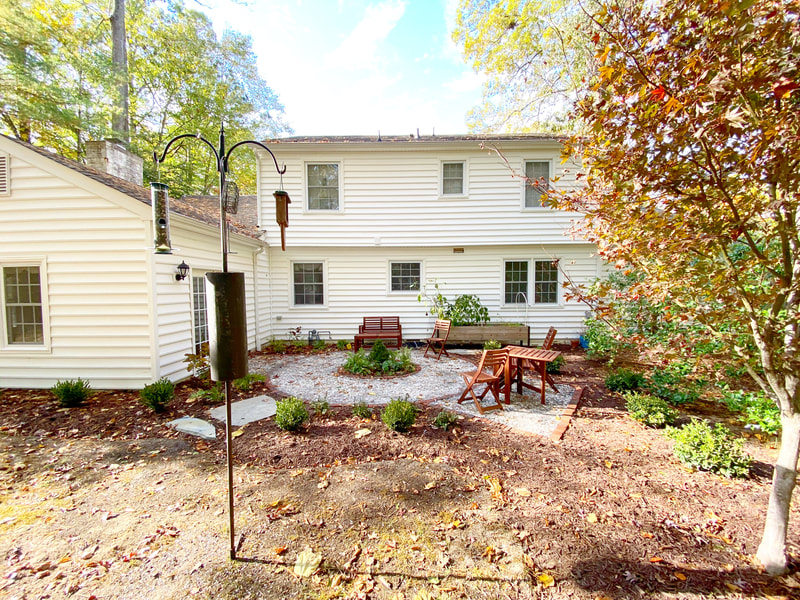 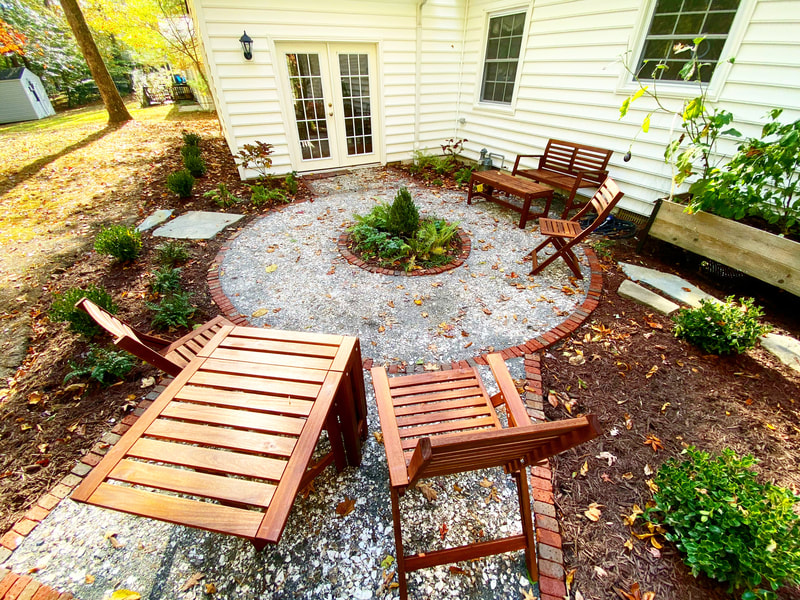 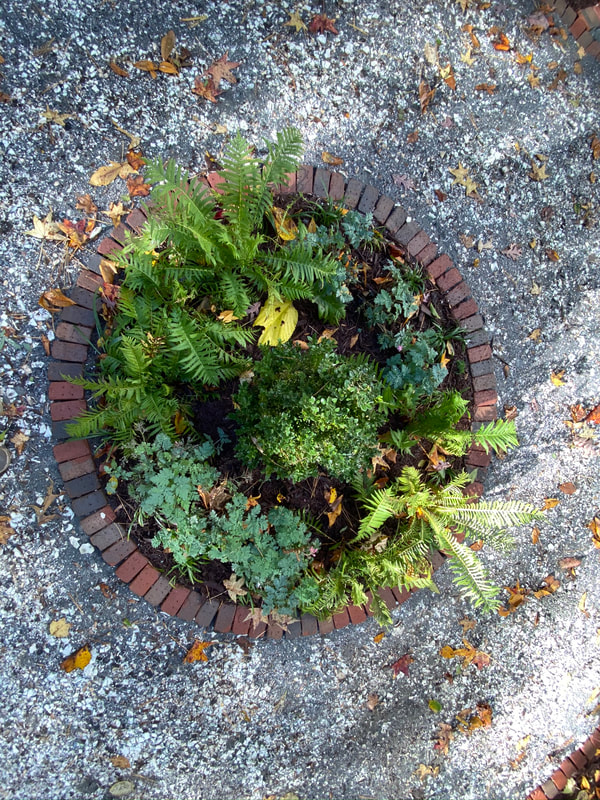